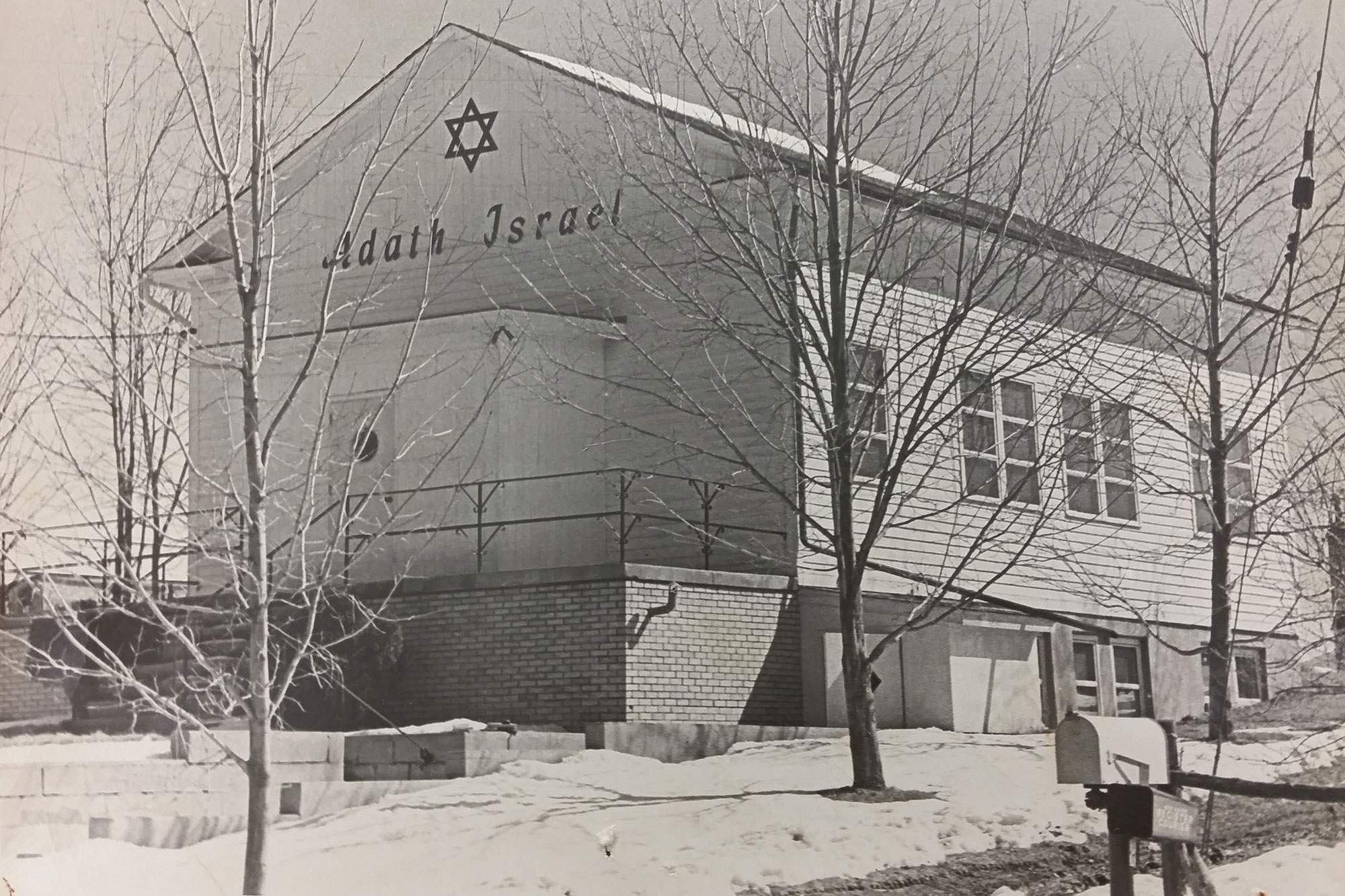 You are here: Home » About Us » History

The Newtown Jewish Community began with the immigration of several families from Russia, Poland, Austria, Hungary & Germany. Orthodox Jewish immigrants fleeing poverty and persecution in Eastern Europe were encouraged to become farmers in Connecticut. One sponsor of this program was the Jewish Agricultural and Industrial Aid Society, which was a subsidiary of the Baron de Hirsch Fund. Beginning in 1891, Baron Maurice de Hirsch, a Jewish German philanthropist, helped finance several of the immigrant communities in Connecticut and throughout the world.

One of the first to settle in the area was Israel Nezvesky (1839 – 1925).  Israel settled in Newtown around 1906 and later became a leader in the community.  Other Jewish farmers followed, purchasing land and building a thriving Jewish community in the area around Huntingtown Road, giving the neighborhood the nickname of ‘Little Palestine’.  The families spoke different languages, but soon found what they all had in common was the desire to worship freely as Jews and the Yiddish language. The families worshipped for several years without a synagogue or rabbi.

Shabbat services were held in various homes. As the community grew, so did the desire to build a synagogue.

“Living on a farm in Connecticut was a tough, rough life” – Sylvia Nezvesky Kirschblum

Many of the residents of Huntingtown Road were farmers. While the families enjoyed the farm produce, most was marketed in Bridgeport. Items included butter, eggs, cream, milk, chickens, cattle and “farmer cheeses” made by the women which was in high demand. Summer vegetables were brought to market in town.

Every Thursday the horses would be hitched up to the wagons at 4am to start out for the long haul to the market in Bridgeport. More than 20 wagons made this long schlep each week. Rain and the winter snows brought many hazards.

A small neighborhood general store opened in 1907 by the Nalven family, near the corner of Huntingtown and Meadowbrook Roads. Food, clothing, hardware and medicines were sold along with typical “Jewish” foods such as salami, herring, lox, cream cheese, bagels and matzos. After Hebrew school, students were often seen buying snacks at the store. When customers were ill, the store made home deliveries. Mr. Nalven eventually sold the store in the 1940’s to Sarah & Morris Levinson who ran the store until the mid 1960’s. Other neighborhood businesses were a cider mill owned by Jacob Nezvesky in the red barn on his property.  The Sussmans ran an animal feed store near the Botsford Station and the Buskers ran the gas station on South Main Street.

During the summer months, the Huntingtown area became a haven for nearby city residents looking for country living. Many residents rented rooms to supplement their income. 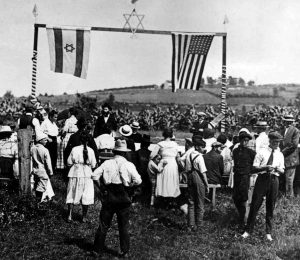 For the five years during construction, services were held at the home of Jacob Nezvesky.

In 1919, the cornerstone was laid for the new building.  In addition to the donation of the land, Israel Nezvesky also donated the first Torah to the synagogue. The community strongly recognized his significant contributions and, in his honor, named the synagogue Adath Israel which translates to House of Israel. Adath Israel is the only known country synagogue in western Connecticut to have benefited from the programs of the Baron de Hirsch Fund. 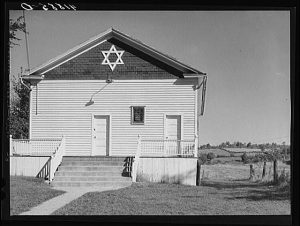 In 1920, Adath Israel opened its doors to serve this small farming community. There was no heat or water. The building was warmed by a pot-belly stove. Seating for men and women was separated by a machitza (a black iron handrail). Men sat in the front, women and children in the last few rows behind them.

People came from miles around to attend services. Many congregants walked as it was against Orthodox law to ride on the Sabbath.  Families who had long distances to travel would arrive by horse and wagon late on Thursday and stay with friends for the Sabbath. The father usually had to walk home to attend to the farm animals on Shabbat then return to take the family home on Saturday evening.

The first President of the synagogue was Isadore Kaufman. The first religious leader arrived in 1923. He was an Orthodox Rabbi named Samuel Steinfeld who immigrated from Latvia. He could speak and write in six different languages.  He also worked as a farmer to earn extra income.

The Hebrew school was a very important part of the synagogue and from the beginning it was a priority to educate the children.

The 1930’s and 1940’s were a very trying time for the entire country. The effects of the Great Depression impacted our community as well. Employment was scarce, but the farmers and their families were not significantly affected by the food shortage. They survived by living off the land and renting space to boarders from the city. The community also welcomed many new immigrants.

In 1938, following the death of Rabbi Steinfeld, services were led by Max Newman, Ike Goldstein, Jacob Nezvesky, David Steinfeld (son of Rabbi Steinfeld) and other lay leaders with various cantors and rabbis being hired to lead High Holiday services. Max Newman ran an auction on the High Holidays selling aliyahs to raise money to pay the cantor.

Many young adults within the congregation served overseas in World War II. During that time, multiple Jewish families fled Europe in hope. However, following the war, the reality of the Holocaust brought about changes to the Jewish Community. Adath Israel honored survivors and mourned the loss of millions. Many younger congregants left what was still a rural Newtown for jobs in large cities. While the remaining members were devout and observed Holy Days and the Sabbath faithfully, total membership started to decline. 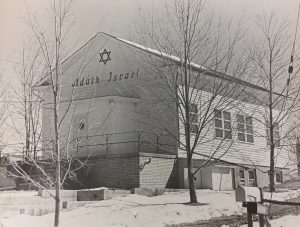 In 1957, Sam Nezvesky, Abe Nezvesky, David Steinfeld and Isadore Brier launched a project to raise up the building to add a basement with a social hall, classroom space and indoor plumbing for a kitchen and bathroom. The sanctuary was also redecorated using seats obtained from a theatre in Bridgeport. This was the first time the building would have heat and water. With the renovation complete, the building was rededicated on June 26, 1960.

The congregation now consisted of less than 20 families and it became clear that Adath Israel would not survive as an Orthodox synagogue.

In 1968, the congregation led by newly elected President David Zendels, called a meeting to discuss Adath Israel’s future. Fifty people attended the February meeting. They voted to change to a Modern Conservative doctrine. Thirty-five families joined the congregation, but some of the elders were not happy with this decision.

The congregation continued to have an active Sisterhood. They helped to organize a youth group which provided community service to various people and organizations.

In June 1978, Barbara Phillips, Brenda Meyerson and Eleanor Zolov were instrumental in continuing the growth of our synagogue. Over 100 people attended a membership brunch in the social hall.

Tommy Goosman was President for 10 years. At Chanukah he was quoted as saying: “Blessed is the flame which is rekindling the interest here in the synagogue.”

The first Adath Israel newsletter was published in 1978 by Laura Lerman. Sybil Blau continued as editor for many years.

Rabbi Jeffrey T. Segalman was hired by the congregation in 1979 as their part time rabbi. The congregation voted to allow women to participate in worship services and weekly Friday evening services resumed. 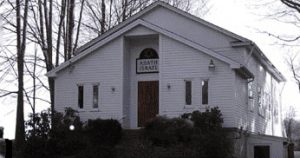 The synagogue began to flourish with the start of many new committees and programs: Purim Carnivals, Community Passover Seders, Break the Fast, Chanukah Parties, a Birthday Book Program for the Hebrew school children and a Progressive Dinner which was introduced by Bunny Cohen and Sybil Blau.

The building expanded to include a rabbi’s study and another classroom space on the main floor. A beautiful new ark was constructed to enhance the sanctuary.

Members became active in social and political activities. In 1987 a small group went to Washington DC to support Jewish emigration.

After many years of part time student rabbis, Rabbi Moshe Betan became our spiritual leader in 1989. His focus on education was one of his many gifts to our synagogue for the next 12 years.

Unable to expand the original building, other options were discussed. Plans were drawn and fundraising efforts began including a capital campaign to raise funds for a new synagogue. 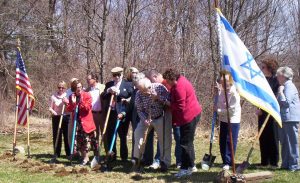 Rabbi Moshe Betan retired in June 2002. Rabbi Shaul Praver joined our congregation in August. He brought with him a love of music. Our services were filled with his beautiful chanting melodies. The children enjoyed learning Hebrew through songs and games.

A ground-breaking ceremony for our new building took place on Sunday April 10, 2005 just two building lots away from the original Adath Israel. The land was donated by Pearl Nezvesky Brown. Descendants of the original farmers participated in the festivities; many of whom are still members today.

On Friday September 7, 2007 the new building was dedicated with great joy as we paraded the Torahs down the street from the old building to our new home. We celebrated the High Holidays in our beautiful new sanctuary and named our Hebrew school “The Nezvesky School for Jewish Education” in honor of Dr. Louis Nezvesky, a major contributor to the capital campaign. 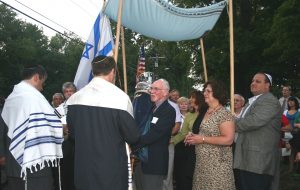 Synagogue life continues with a variety of activities for all ages in our beautiful new building. Our new space is comfortable, warm and accessible for all members and guests.

On December 14, 2012 the loss of many lives at Sandy Hook Elementary School sadly affected us all.  We gathered together to pray and comfort each other along with the entire Interfaith Community.

Rabbi Barukh Schectman joined us in 2016. Both scholarly and personable, he shares his wealth of spiritual and educational knowledge with the entire congregation.

We continue our tradition of welcoming all to join us in celebrating Jewish tradition. We are proud of our history, our heritage and our community. We are happy to have shared this with you as we celebrate 100 years!